Cafe D’Lite is another popular food stand at the Aberdeen food court. Their most popular items are the Hainanese chicken rice and their laksa. Baby-Paca, Mamallama and I usually get the Hainanese chicken rice, but it was a cold, blustery day and we were in need of some soupy comfort that would warm us up from the inside out. We decided on the Hainanese chicken laksa ($8.25). I was not a fan of laksa previously, but it may largely be due to the fact that I’ve never had good laksa. So I got adventurous and decided to test if my taste has changed. 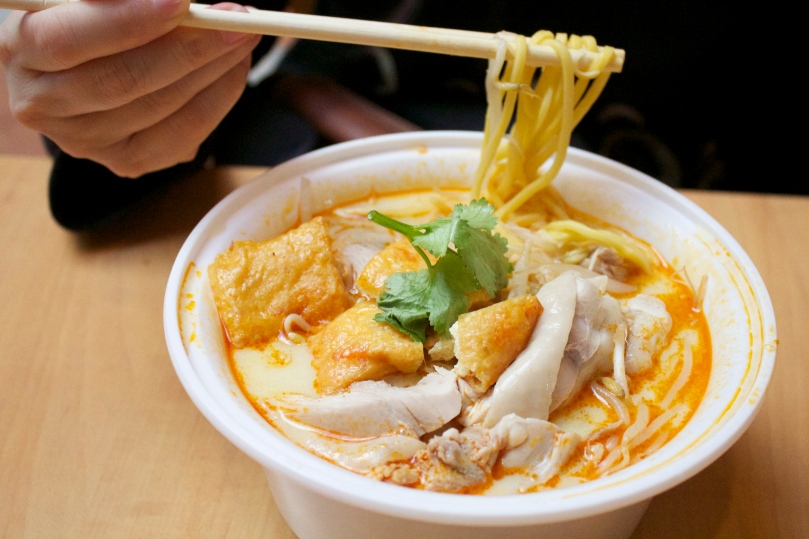 I’m slightly appalled and reluctant about eating anything that has a film of oil floating on top, but I’m glad I tried it because the coconut curry broth was creamy, fragrant and flavourful. I was expecting it to be spicy, considering the amount of chili oil floating around, but it was barely spicy at all. There were plenty of Hainanese chicken, a bunch of bean sprouts and a few tofu puffs. Their chicken were plump, juicy, tender morsels. The best part is that it’s boneless. But there’s been agreement that their Hainanese chicken used to be better, I find that they’ve recently lost some of its flavour. I was surprised to find rice vermicelli noodles at the bottom. Completely random, but it was a pleasant surprise because I didn’t really like the thick dense yellow noodles. They were kind of bland as the soup just kind of slipped off the strand of noodles. The flavour of the soup clung onto the rice vermicelli better.

The final verdict? This bowl of laksa was pretty decent, not amazing, but I think it sparked my interest. Now I’ll be off on the hunt for that perfect bowl of laksa.

Hello, my name is Sylvie. I'm an opinionated Vancouverite on the lookout for good eats. I spend a disproportional amount of time deciding what to eat, eating, talking about eating and working out so I can eat more. When I'm not eating out, I enjoy making homemade dishes and baked goodies. I am also a zealous upholder of a healthy, active lifestyle. Join me in my adventure, one click and one bite at a time. Reach me at 718shyc@gmail.com or @Alpacalunch4two on IG